I was told this is too harsh... what do you think?

Once upon a time there were two sisters.
Both were beautiful and courageous. 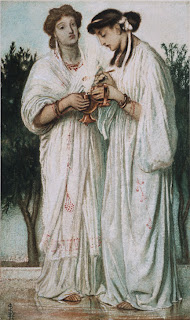 Both loved one man. 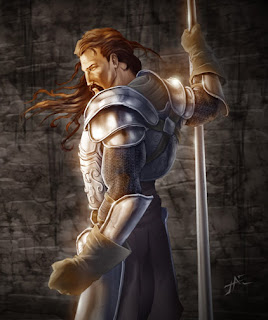 Now you say this is a recipe for a mess, and it was.
The man loved both equally for they were very alike in many ways.
Then came the summons of the King. All able bodied men should go to war.
The two sisters watched as he packed his bags, crying and wondering if they should ever see him again. He asked them to write and both promised they would. He walked into the sunset.
The one turned to the other and said, “I cannot see him go and sit here and wait.” She gathered a few things and followed him to war.
Days, weeks, months, and years passed.
The war was hard.
The sister fought with valor. She became as strong as any man. She wielded her sword with skill. At first she fought with the man and shielded his back from brutal blows. Soon she became so valued that she moved always up the ranks. 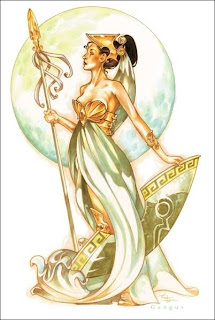 The other sister stayed at home. Every week he received a letter telling him of the seasons and what was happening in their sleepy town. Every week he knew her prayers were uplifting him from afar.

At long last the war was over. The three met again upon the hill. Two were strong and bold. One was delicate and innocent.
The war worn sister prepared herself to receive her husband but found her sister received the prize.
Angry she approached her sister. “He is a fool and swayed only by his eyes. He does not realize that I am his equal, or perhaps he is afraid because I am.”
The softer sister shook her head and calmly said, “It is not weakness he seeks in me. For which is harder? To go to war and always have something to do and fight for, or to sit at home and wait without becoming bitter, and hard; or afraid, and clingy; or domineering and independent? I have fought a war, but I did not try to fight his for him. I fought the war to maintain a place of peace for him.” 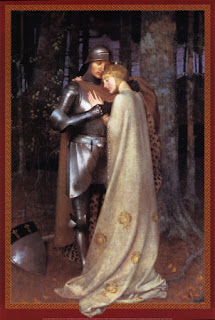 Back in the day I learned about subconscious, conscious, and... that other one that's the deepest. And I thought I had a pretty good grasp on it. Your subconscious was created in the past(like childhood) and is the filter through which you interpret the world. So being formed at a very young unwise age it's prone to flaws of enormous consequences! Like someone abuses you and now for the rest of your life you think you are a bad person. Well, that's stupid but that's how it works.
Here's where I was wrong though.
I was taught, or I though I was. That in order to over come that, you have to remember the triggering events and learn to think about them differently. This can be a very painful and difficult processes because more than one event almost always formed the subconscious result.
Ok, but what if it's not that way? What if they're going the long way around a problem?
I recently had brain circuitry explained.
What causes subconscious thought? It's not what you learned as a child, that's just true through default. The subconscious is your auto pilot. It's the quickest most efficient way to get the result you want. Meaning your brain wants to do things in an efficient manner so it build circuitry and then uses and reuses it because it is easiest to use.
You were abused so you thought you were a bad person. You were abused again, that circuitry is already there so it is used again making them stronger connections instead of trying to create new ones. By the time you're an adult anything bad that happens to you get sent through that filter because it's so well built up.
So do you have to go back and look at each of those events to over come it?
NO!
You don't have to remember a single event. If you do then you can face it and deal with it but you don't HAVE to.
The key is to build new brain circuitry which them allows the old circuits to shrink and you've literally built a new subconscious! A filter of your older(hopefully more wise) self to use on auto pilot! It just makes me happy. I'm no long a prisoner of the past. I can choose how I see things in the future and I don't have to carry around baggage, mine or any ancestor's.
How do you do it? I'm sure that parts the most complexly simple part of all. Of course it starts with realizing your thinking is wrong and getting a good look at what you would prefer it to be. Most people do it with self talk. And I know that's part of it. A great deal of it is to be aware of what you're thinking and not letting auto pilot take over. Choose what you think and fight false thoughts with statements of truth. I strongly believe it involves kicking those spirits(those who know this is one of your thought pattern and like to whisper you thoughts that get you started down that path) out of your life. Another part of it is just practise. It took time to build those circuits it will take repetition to get out of them. The main thing is not to run from wrong thoughts but to face them and say "You are wrong. This is what is right." Then replace.
This concept I wish I could share with the world. I gives the power back to me. And doesn't make me feel overwhelmed by trying day in and day out fighting something that seems impossibly to fight. I've already come so far and I didn't know I was doing it.
Growing up and in college I believed there was something wrong with me. I did everything wrong and I was unworthy because there was something wrong with me. I don't believe that any more. It amazes me I ever listened to the blatant lie. And the stupid choices I made because I believed it. But it doesn't matter anymore because I don't believe it anymore. Yet at one time I did. It controlled my whole world. Good and bad choices were made because of that one belief. How did it change? I married a righteous husband and had children. Somewhere in my mind that didn't fit with the theory. So I had to replace it. Any time it would come up I would have to say, "how can that be? It can't be. I'm a good person. And I have everything I need to make it through this life or I wouldn't have come this far." Now I know how it works I can choose how I want to respond ... oh so freeing!
This is freedom, to know you have a choice and to make it!
Posted by mE at 10:30 AM 3 comments: