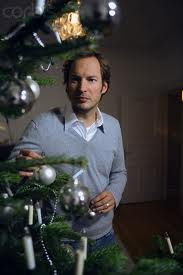 Tommy took the ornament out of the little box and carelessly swung it from its hanger placing it in a very convenient spot at the bottom of the tree.
“Tomas Daren Parks! You give me that ornament right this minute!” Grandma’s voice was almost frantic. Putting up her tree wasn’t Tommy’s idea of a great weekend, especially when there was a new layer of snow on the mountain just waiting for him and his snow board. Now she had to go and get picky too. Since his mother’s death a few months ago everything sucked but his snowboard, especially living with his Grandma while his dad was AWOL.
“Here you go.” He handed his Grandma the old trinket and turned to the next item. He pulled out an intricate blub wrapped carefully in tissue paper. He carefully placed it high up in a prominent spot and turned to smile at his Grandma.
The old woman did not look up. She didn’t acknowledge his carefulness with the apparently prized object. She merely sat looking at the piece in her hands with tears running down her wrinkled cheeks. For the first time Tommy really looked at what his Grandma held. 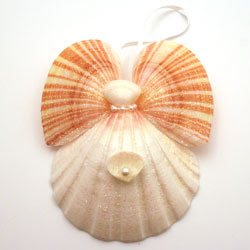 It wasn’t large or even fancy, really it looked like a school day craft. It was an angel made out of shells with what looked like a little fake pearl was glued inside. There really wasn’t anything spectacular about it. And his Grandma was even known to take angels wings off for her decorations.
“Grandma?”
“One shell for every summer he took us to the beach.”
“Huh?”
The old woman looked up and smiled at her Grandson. “Did you know my father was a traveling sales man?”
Tommy chewed the inside of his cheek and looked out the window at the fresh powder. “Sure Grandma. What’s next?”

Grandma took the hint and placed her hand over the treasure gently and pointed to another box in the corner. “You can put those out on the counter and then we’re done.” She opened her hands and looked down again. “You don’t mind if I remaniss while you’re at it, do you?”
Tommy shook his head slicing the box open quickly. One more box, some cookies, and service project over!
“When I was a little girl my father came home about once a month. It was a wonderful time. My mother would dress up in her one nice dress and he’d take us out on the town. How we’d laugh and dance the night away. They held hands and whispered secret jokes to one another. Of course he called to say goodnight every night but when he was home we were all so happy. Then he’d leave and my mother would turn grey and empty again. She was a good mother but we were both lonely. There was one place we were always happy. 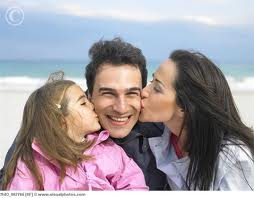 At the sea. My father took us there for summer vacation. One whole month of walking sandy shores and collecting wonderful treasures. We were so happy on those long warm days. Five summers we did this and I would keep the most perfect shell each time. See.” She held up the ornament for Tommy to see. He looked and nodded. “We were about to leave and I knew the long days of loneliness would soon consume me again. So I ran away.” Tommy stopped mid- teddy bear and looked at his Grandma.


“You ran away?”
“Wouldn’t you?”
“No, I mean at least you had parents, right?”
“I felt like I only truly had them at the beach.”
“So how’d they find you?”
“They didn’t. She did.” Grandma held up the angel beaming at it.
“Right.” Tommy once again wondered about his Grandma’s sanity.
Grandma frowned, “You are full of things to do but you do not know what you have.” She wagged an aged finger at him, “There’s more to life and being happy than sports and friends.”
Tommy wanted to chuck the ceramic bear at her but he slammed it down instead and just kept unpacking the stupid box. All his friends were back at his home, he had nothing but sports.
“If I stayed on the beach,” she finally continued in a small pleading sort of voice, “my parents would stay and then I could watch them from afar and know that they were happy. At first I headed to a cave I knew of near the shore, but the tide was up and the cave was unreachable, so I went futher down the shore. At first I thought it was my mother’s voice calling me, so I ran. But, instead of getting away from the voice, I only got closer, until coming around a rock I saw her standing on rocks bright and beautiful. 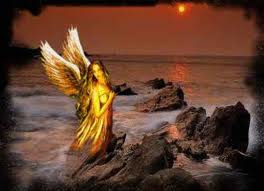 She shone like sunshine and her face looked out to sea as sad and as miserable as I felt. Just around her the night melted away into day. She called my name without looking at me and waved for me to join her. I crawled up the rock and sat down next to her feeling a comfortable warmth right next to her. ‘You shouldn’t run away.’ She said finally looking at me. She looked so much like my mother but it wasn’t her. I told her I had to. It was the only way for my parents to be happy. ‘You running away won’t make them happy, it will ruin everything.’ She reached down and dipped her hand in the water and pulled out a beautiful shell and opened it. Inside was what looked like a giant pearl. In its surface I could see my parents searching the shore and finding a cold wet body empty and devoid of life with my bow in its hair. I could see my mother and my father sitting with empty eyes and arms as they grew old without any child to fill them. ‘But,’ her voice sang out in the night air, ‘If you go home and live the life you were given,’ once again the scene in the pearl shifted and I saw my father, mother, and myself around the Christmas tree as he told us he’d gotten a job two blocks away and he wouldn’t be leaving anymore. I saw us moving to the sea shore and living happily there for many years. Then I saw children who had yet to be born gathering around myself and a handsome man I latter met and married. Then I saw you grandchildren. I even saw you and your mother the first time she took you sledding.” 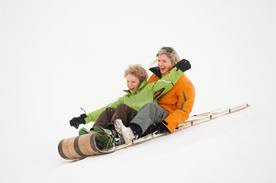 Tommy waited patiently fidgeting with the last figurine. Finally he asked, “So that’s it?”
“Almost. She told me to never give up because my life was better lived than run away from and she kissed me and told me she loved me. I went home and it all happened just as I saw. Then one Christmas I noticed my jewelry box had been ransacked and all that was missing were my shells. I asked about it and your mother handed me a small wrapped present saying she had meant to save it for Christmas. I opened it and found this.” She looked down at the angel cradled in her hands. “I had never told anyone about the angel by the sea but she had even found a little pearl and glued it in the shells.” Grandma stood painstakingly slow and walked over to Tommy. She took his hand and slowly placed the small ornament in his hand. “Did I ever tell you how much your mother looked and sounded like my mother? What a life she lived.” She closed his hand over the object. “I think she is your angel now.” 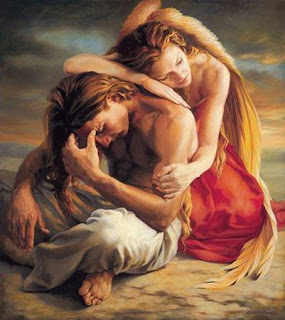 Idea for how to make the ending better? Ideas for names? 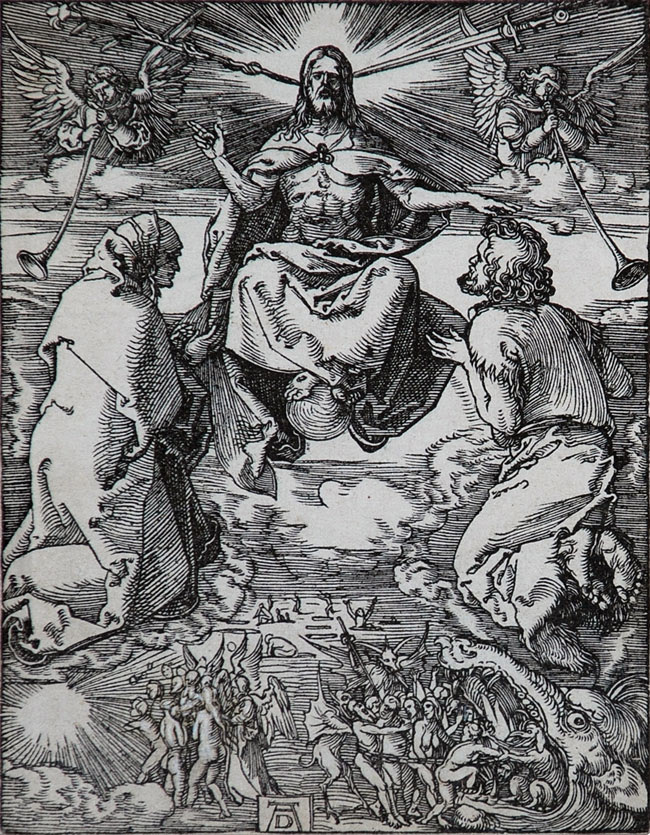 (PS Not sure I like the picture... does no one have a painting of Heavenly Father in Judgment with Christ as the advocate and Satan as the accuser?)
Posted by mE at 5:04 PM No comments: