How the Farmer's Wife got a New Feather Duster

Now the chicken yard happened to be just outside the big picture window in the Farmer’s best parlor. When guest would come the farmer and his wife would proudly point out their lovely White Leghorns, the shimmering Buff Orphingtons, the Beautiful Dappled Bard Rock, and the fluffy white Silkies. 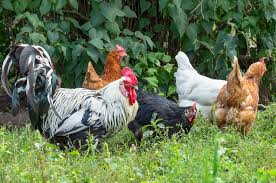 The chickens thought this was just fine and fluffed, and preened, and dashed to take their places strutting proudly before the window; daintily scratching about for grubs and pieces of grass, whenever they saw company coming.
Then one day, just as she was about to catch a bright green grasshopper, the littlest Silky looked in the window and gasped in horror! The farmer’s wife had a beautiful black chicken by the feet and was shaking it all over the furniture!
Quickly she called to the other to see for their own eyes. “Something must be done!” clucked the distressed little Silky.
“I’ll say!” cackled the dappled Bard Rock. “In all my life none of us have ever been invited into the house. And that chicken is being allowed to touch everything!”
The tall White Leghorn sniffed indignantly, “I should have guessed they’d prefer black to white.”
“Yes,” mussed the Bard Rock, leaning forward to look closer, “it is a perfect jet black isn’t it?”
“Yes,” they all clucked in agreement.
It was sure, the farmer’s wife must have the most beautiful chicken to take into the house and wipe all over her furniture.
No longer satisfied with being shown off to the guests, the hens took care every morning to preen and fluff and strut and cluck when the farmer’s wife came to their pen. But all she ever did was take their eggs and smile, saying softly, “Are you all just the prettiest bird that ever walked the earth?” But they knew she didn’t mean it, because day after day, it was the black chicken and not they being swung by its feet all around the farm house.
“It’s not fare,” declared the Leghorn one day as she sat waiting to pass an egg. Then she had an idea, one she could not do alone. So, she called all the other chickens to her, and told them her idea.
They each quickly agreed, but the littlest Silky was not so sure, she was after all the one putting herself most at risk. “Now that gets one of us a chance, but what about the rest?”
“Oh we’ll take turns,” the much larger hen assured her in an off handed way. She just knew she would be the next to be chosen and she didn’t want to wait a moment longer than she had to.
The little Silky hushed and they waited. Soon, as was her afternoon habit, the farmer’s wife entered the parlor and began to shale the bird about. The golden Orphington flew over the fence and pecked at the front door. When the farmer’s wife appeared, she gasped that the bird had escaped her enclosure and swiftly dropped her things and ran after the now retreating bird. As soon as she had gone the Littlest Silky scurried into the house.
The hallway inside was so big the poor little bird might have left a surprise for the farmer’s wife. But remembering her task she quickly ran around hoping up and down until she found the feathered mass. She grabbed it by the wing and darted back out to the hen house with the mass of feathers flopping about behind her.
All the hens gathered around and stared at the now still figure. “Oh dear,” sighed the largest of the Silkies, “You’ve killed it, dear.”
They all stood about unsure what to do next, until the Large White Leghorn, who wasn’t as sure the farmer’s wife would like her pure white feathers now that she looked closely at the black, stepped forward and declared, “Well she won’t need these anymore!” and with that she snatched a hand full of feathers and gave it one great pull.
Just like that the hen house erupted, each hen grabbing and grasping for all the feathers she could get her hands on! Until, the dust settled and nothing was left of the bird but one leg bone. (It was rumored there after that the curious Bardrock had stolen the beak but she always denied it.)
The next afternoon the farmer’s wife came into the room just as usual but she went here and there looking all around. At last, in frustration she stopped and put her hands on her hips. That’s when her eyes fell on the chicken yard. There, with all the pomp and strutting they could manage stood every single chicken with black feathers tide all over them! 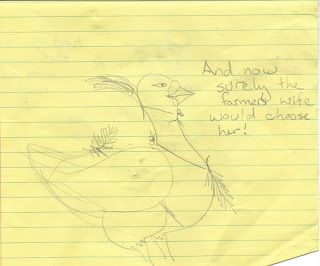 She gawked and then gasped and then ran out her front door to the chicken yard.

The hens, their little hearts all a flutter, ran up to her, each knowing that her stunning beauty was sure to be chosen. Imagine their delight when the farmer’s wife grabbed them by their feet and shook each one with all her might! 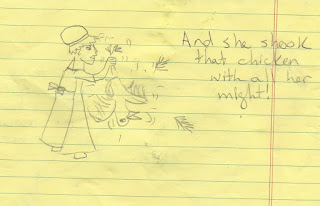 Imagine her surprise, when finishing shaking one, she found another black feather duster covered chicken offer itself up to be shaken. But it didn’t stop till every last chicken had been shaken and all the lost feathers had been reclaimed, not to mention a whole lot of new feathers.

That night, in the hen house, it was decided that being shaken by the feet was perhaps not a job to be sought after. And if you looked in the big window in the afternoon as the farmer’s wife dusted, you would see that her duster was no longer just plain black. It was white, and speckled, and, fluffy, and golden. And she smiled whenever she used it.