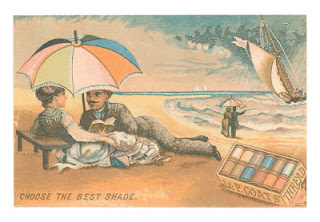 Samantha finished the last word with a flourish of her pen immensely pleased with her creation. The azure blue sky stretched on for miles with delightful seagulls passing unseen across her field of view. She smiled setting the pen and paper to her side and scanning the shore line for her husband. Two days ago he had unknowingly hurled the insult again, but now he would change his tune.
“Mark!, Oh Mark!” She almost sang it out.
Mark appeared from behind a sand dune several yards away, a look of hope on his face. Two days ago she had suddenly taken to writing non-stop and had refused to even acknowledge his presence. It was not the way he had intended to spend his all too brief vacation. “Yes dear?”
“Come, read this.” Samantha responded holding out a thick stack of papers.
With a bound and a leap he reached her side and eagerly began to read.
Samantha hugged her knees imagining the praise and astonishment he would express upon finishing her first novel. Of course it wasn’t prefect but she had always known she was more than just a short story writer no matter what others said. She frowned, with that many pages she would need to give him time. She looked over at him his eyes hastily running across the pages. She had thought it would be interesting but his eyes seemed to fly at an astonishing rate. She smiled and looked back out at the sea, it was even better than she had thought.
She stood up and dusted off the back of her dress just as he burst out in laughter. She turned excitedly wondering where he was and what he had found so funny. Only to see he was closing the last page.
“That was your best story so far Love!” He said with a grin and a chuckle.
“You’ve already finished?” She asked in horror.
He starred warily at her unsure of where her mood was turning or what he was doing to turn it. “Yes,” he said finally, “It was very good though.”
Samantha snatched the pile of papers from him. “Not even you can read a whole novel that fast.”
“A novel?” Mark grabbed the papers back before she could tighten her grip. He flipped quickly through the pages again, his frown deepening. “I’ll grant it’s longer than usual but it’s no novel. Maybe five pages.”
Samantha felt like ripping the pages up and throwing them in his face.
“I can count as well as you can and even a blind man from the top of that cliff can see that there are much more than five pages there!”
“Yes,” he acknowledged slowly looking up at his wife. She glared back and he almost didn’t dare the reply but like a seagull on attack the words slipped out carrying a grin to tug at the corners of his mouth. “But usually you don’t want me to read the parts you’ve crossed out.”
Posted by mE at 2:40 PM No comments: